Skip to navigation Skip to content Skip to Footer

The Radical Space of Possibility: A Conversation with Angela Yarber

The Radical Space of Possibility, Act 1 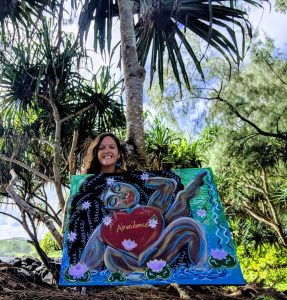 “The classroom remains the most radical space of possibility in the academy.”—bell hooks

Ua Mau ke Ea o ka ‘Āina i ka Pono (The life of the land is perpetuated in righteousness) (quotes from Dr. Angela Yarber’s “Holy Women Icons: Embodied Ecofeminism and the Arts” syllabus for a one week intensive course on the Big Island of Hawai’i)

Dr. Angela Yarber is a feminist scholar of religion and spirituality and pedagogy, a painter, a dancer, an activist, a parent, and sustainability lifestyle advocate.

Tina first met Angela in Spring 2005 when they worked together in an introductory biblical studies course at Agnes Scott College; Angela was completing a “pedagogical internship” as part of her Master of Divinity program at McAfee School of Theology (Mercer University). Angela completed her doctorate in Religion and the Arts (at the Graduate Theological Union in Berkeley and has certificates in Women’s Studies in Religion and Sacred Dance Studies. She has taught at Wake Forest University (“Gender, Food, and the Body in Popular Culture;” “Embodying the World’s Religions;” “Women, History, and Myth;” “Embodying the Feminine Divine.”)

In Part One Angela outlines her approach to the concept and lived experience of “justice” at the intersections of feminism, queer theory, art, and activism. Through her Holy Women Icons, Angela imparts her vision for a just world—one that re-members the goddess/women who embody resistance and power.

In Part Two we talk more with Angela about her place-based pedagogy in Hawai’i. Angela describes her pedagogical approach for her intensive course: “This land-based intensive class is grounded in the engaged theory of bell hooks, and structured in Parker Palmer’s knowing, being, and doing framework. The classrooms’ radical space of possibility expands to encompass the orchard, garden, art studio, dinner table, and active volcano, tide pool, and those much-beloved seminar spaces of dialogue. Research, reading, painting, writing, discussion, cooking, planting, harvesting, and exploring Hawai’I are our various methods of learning, engaging the mind, body, and heart.” Angela is committed to “Decolonizing knowledge, the strict boundaries between disciplines, and the classroom, [where] students engage in knowing, being, and doing simultaneously.”

Return to top of page